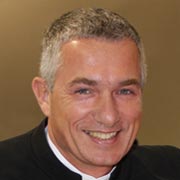 “Jesus went up the mountain and summoned those whom he wanted and they came to him. He appointed Twelve, whom he also named Apostles, that they might be with him and he might send them forth to preach and to have authority to drive out demons.” (MK 3: 13-15)

This is the first task for “Twelve, whom he also named Apostles,” and for everybody else from “those whom he wanted,” even in our own time, “that they might be with him.” How often do we think that when we are called, consecrated, or ordained, He is calling us to work for Him—“to preach and to have authority to drive out demons.” It took me years to understand that the most important thing is to be with Him, not to work for Him. The same is with marriage; marriage is to be husband or wife, not to have husband or wife.

“God was reconciling the world to himself in Christ, and entrusting to us the message of reconciliation.” (Gospel Acclamation)